OK so I’ll be the first to say that although I liked some of Chrisette Michele’s music before last night I wasn’t the biggest fan, and I don’t mean this in a negative way. Even though she is considered an RnB artist, her music is very much influenced by Jazz. I like some Jazz (Boney James, Sade, Pieces Of A Dream) but it’s very seldom that I actually buy an album. Despite the fact that I love and buy all of Chrisette Michele’s singles, the only album I’ve ever bought was the first one titled I Am.  What I’ve realized about myself, especially after last night, is that I tend to like the more up-tempo jazz music better live than the record. In all honesty what made me buy a ticket for her show was seeing her on the TV One show RnB Divas. Her personality, style, and the peek into how she is behind the music scene is what made me want to go. Plus a friend of mine is one of her photographers and I knew he’d be there and I wanted to catch up with him. Needless to say I was completely blown away by her performance. Get into these details….
I decided to get there early because of what happened at the Donell Jones concert. I will say I got in there quicker than I did last time. Evidently they found a better and faster way to check tickets. I strolled up into Medusa around 9:15 and chopped it up with my friend by the bar for a while. Then while he made his way backstage I moved closer to the stage to make sure I had a good spot. I must say out of all of the concerts I’ve been to that had DJ’s mixing this one did his thang. DJ Phil really was JAMMIN! I didn’t drop it like it’s hot this time though lol. The crowd was mostly people that looked to be in their 30’s and it was a sprinkle of some older folks and couples. Sometime after 10:30 the radio personality from 105.7 came on stage, hyped up the crowd, and then introduced Chrisette Michele but she didn’t come on stage. Everyone was just standing there like umm ok where is she??? So the DJ went back to playing music then around 11:00 she finally graced the stage looking GORGEOUS. She opened up with her song “Epiphany” and immediately the crowd started singing along. I must admit I don’t know why but I thought she was only going to be very poised with very little movement during the show much like how she was in her video for “If I Had My Way”. But honey I was wrong! Bae Bae Ms. Chrisette grooved across that stage all night. And I swear like three times I thought she looked right at me lol, I don’t know maybe I was trippin. She also performed songs “Golden”, “Charades”, “Let’s Rock”, “What You Do”, and “Mr. Radio”. One of the songs I really liked that I hadn’t heard before that had me like oooh I gotta go download that was “Supa”. I think what impressed me the most about the whole performance was how she was able to capture my attention, how she connected and interacted with the audience, and how she was able to bring about certain emotions within me. Cause when she sang “Blame It On Me” and “Better” I promise I was all up in my feelings! Especially when she got to preachin. When she was saying “I deserve someone that will love me and make me feel better” inside I was just like YAAASSS I DO! Where is my Mr. Right? Yes all in my feelings smh. At some point she introduced all the members of her band and they each did a quick solo and I gotta say homegirl picked some great musicians because they were BAD! (in good way)I am a sucka for a great band. Halfway through the show she hooked us up with her version of Erykah Badu’s song “On and On” which I’ll have posted below. The Grammy Award winner and 10 times nominated artist for multiple awards closed the show with her single “A Couple Of Forevers”. The show ended around 12:30. Her music is so relatable and I think like most people I personally had gotten used to liking commercial music that didn’t have much depth or meaning to it. Going to this concert allowed me to take a step back and recognize good music again. 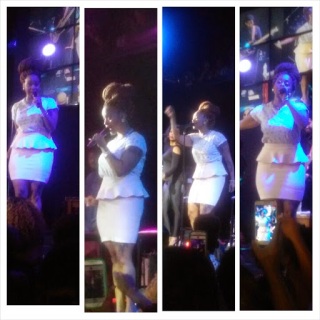 Overall the show was great and I most definitely wouldn’t mind seeing her again. I really don’t have much bad things to say about the show. Sometimes the music seemed to be louder than her and you had to listen hard to understand what she was saying but that didn’t happen a lot during the show. I feel like I got more than my money’s worth (ticket was $30). She also made sure to mention Mike Brown and how we need to love one another and the police brutality needs to stop. If you’ve been under a rock somewhere and don’t know about the Mike Brown controversy I heavily suggest you Google it. She also promoted her new website richhipster.biz which is a website that showcases art, music, fashion, and more. Be sure to go and check that out. After the show was over I linked back up with my friend and we went to eat at a place down in Deep Ellum called Buzzbrews. If you haven’t been I suggest you go if you’re ever in the area and get their chicken quesadillas cause it was the bomb.com. Anywho I had a great time. Chrisette Michele is a dope artist, her voice is truly and instrument, and I look forward to her future project The Lyricist Opus. Peep the links and my personal videos below and don’t forget to share my blog 🙂 …

Sidenote: Why halfway through the show I realized I needed to wipe my camera lens and I figured out a way to make the video clearer. Unfortunately some of the video footage I have the music is too loud so I didn’t bother posting.

Here are my videos from the show…